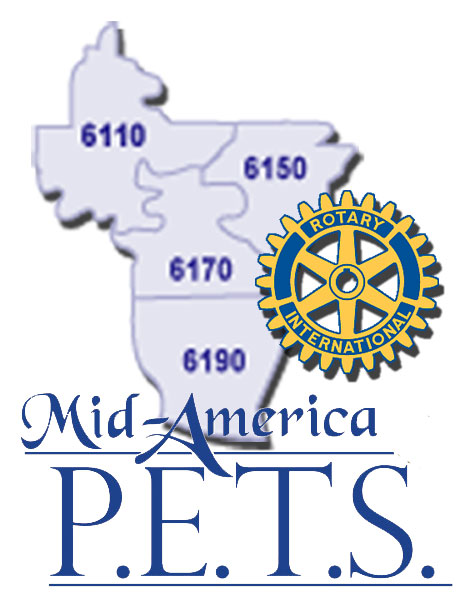 In July 2003 I attended my first Multi-District Alliance meeting, along with DGE Jake Morse, PDG Jerry Brackett, and DGN Marilyn Hummelstein of District 6150 and PDG Jane Molloy and DGN Bob Molloy from District 6190. We were amazed at what we experienced! We saw top Rotary leaders, including RIPE Glenn Estess, General Secretary Ed Futa, and Foundation Manager John Osterlund address the group and seek their input. We saw RI staff members responsible for writing PETS curriculum visit the meeting to provide information and seek feedback. Most importantly, however, we saw experienced PETS leaders from throughout the country sharing information with each other on issues such as dealing with facilities, contracts, keynote speakers, discussion sessions, facilitator training, and District sessions. I asked Glenn Estess why he supported the Multi-District PETS concept. He replied, “You can do everything that you are currently doing in a single District format, plus things that you could never accomplish alone”. Foundation Trustee and PETS Alliance co-founder Ray Klinginsmith told me, “It’s the sizzle! You cannot create the excitement with 40, 50, or even 75 PE’s meeting together that you can with you have a meeting of several hundred”.

From the dreams of a few Rotary leaders, we had created a new organization with one purpose – to provide the best possible experience for our presidents-elect. We asked PDG Travis Adams of District 6170 to be our first General Chair. Travis proved to be a skilled leader who masterfully navigated the unknown waters in putting together our first event at the Peabody Hotel in Little Rock on March 11 – 12, 2005. At our initial event we had speakers that included Dr. Mouzon Biggs, who had spoken for many years at Lone Star PETS about each RI President’s theme, Foundation Trustee Ray Klinginsmith, RI General Secretary Ed Futa, and RI Vice President John Germ. As we experienced the excitement of that first event, those of us that had worked to create the organization could not keep from looking at the top Rotary speakers, the ideas that were being exchanged in the discussion sessions, the networking that was taking place throughout the event, the bonding that was taking place in the District sessions and saying to each other, “We could never have done this alone, but together anything is possible.” We knew that not one person from that lineup of speakers would ever agree to attend our single District PETS.

After two years at the Peabody we moved our event to Ft. Smith. We have continued to improve the experience for our presidents-elect and have created lifelong friendships as a result of the relationships forged through Mid-America PETS. Today over 95% of presidents-elect are trained in a Multi-District format and the movement is expanding to other countries. Mid-America PETS continues to evolve. Our friends from District 6190 eventually moved to Ole Man River PETS in Mississippi. We are now looking forward to District 5750 joining Mid-America PETS for the 2019 event.